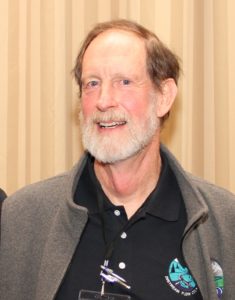 Hal Beecher receiving the Instream Flow Council Lifetime Achievement Award would have been appropriate at many points in his life, and yet he never slows down and rests on past accomplishments. He continues to push forward in the field of instream flow science, conducting research, publishing papers and advising countless scientists in Washington and across North America. Hal has made significant contributions to the Washington State Department of Fish & Wildlife, The Nature Conservancy, and of course, the Instream Flow Council. His contributions are expected to continue, perhaps earning him another “lifetime” achievement award.

The Instream Flow Council knows Hal best as an active and inaugural member and past president of the IFC. Hal co-authored IFC publications Instream Flows for Riverine Resource Stewardship and  Integrated Approaches to Riverine Resource Stewardship: Case Studies, Science, Law, People, and Policy, hosting work sessions on Lopez Island to complete the first book. Yet, within the Department of Fish & Wildlife Hal’s IFC work can be overshadowed by his management of the Water Science Team. He has proved to be an effective manager with a cool head. Not easily angered or flustered, Hal has led his team through an agency merger, funding crises, countless reorganizations, retirements and the loss of a dear friend and colleague.

Hal’s early days of running instream flow models required keying data onto punch cards and entering them into a computer at the University of Washington. Progress and computer terminals in Olympia allowed data to be entered on the UW mainframe over long distance phone lines. A move forward that was fraught with problems, not the least of which were unstable connections that required starting data entry from the beginning after a dropped call. Even though we are firmly in the 21st Century Hal found his computer comfort zone in the form of a Windows 98 laptop that he keeps hidden just for PHABSIM data entry. Don’t tell our I.T. guys!

Of course modeling stream flows isn’t just about computers and data entry. It requires putting in time on the river as well. Time that Hal enjoys and makes sure to share with all of us. While Hal is always, or almost always the epitome of a cool, calm gentleman when working out in the field Brad Caldwell shared his story of Hal trying to find a transect stake on the Satsop River study site. Brad heard a garbled swear word from across the river and turned to see Hal in the air about 6 feet above the river as he had just jumped off the river bank into the river which was deep. Turns out he had found a nest of hornets but his quick thinking prevented any serious problem regarding bee stings. That was not Hal’s last encounter with hornets, as I can remember him stumbling into a nest as I watched from a nearby gravel bar.

I believe Hal would put up with hornets, black widows, and rattle snakes rather than deal with budgets, legislative actions, and state bureaucracy. That’s why we are proud to be part of the Water Science Team and it’s just one of the reasons that Hal is deserving of the Lifetime Achievement Award. Thank you Hal, and congratulations.