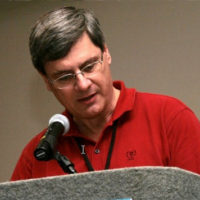 Equally important, and based partly upon his contributions to instream flow science, Don Orth has mentored many of today’s instream flow practitioners in North America, and his influence extends internationally. Over 10% of the Instream Flow Council member agencies have been directly influenced by Don Orth, as students who took his courses and in some cases had him as graduate advisor at Virginia Tech University now serve key roles in implementation of instream flow management in those agencies. Don’s teaching excellence has been recognized through several teaching awards at Virginia Tech, and former students speak very enthusiastically about his mentoring. Don has recognized the importance of instream flow as an interdisciplinary endeavor, supporting the Instream Flow Council’s applied focus.

For his ongoing contributions to the science, practice, and practitioners of instream flow, the Instream Flow Council is proud to present its Making a Difference Award to Professor Donald J. Orth.