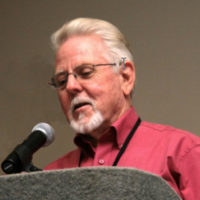 One name, above all others, is associated with the disciplines of instream flow: Dr. Clair Stalnaker. He led the development of the Instream Flow Incremental Methodology (IFIM) as the leader for over two decades of the group that created the method. Clair’s contributions have been in leadership and management of the group of federal scientists, in the philosophical and logical emphasis on the ecological relationships that must be considered for instream flows, and in the sociopolitical context of instream flows, including implementation.

In 1987, Dr. Robert G. White, then leader of the Montana Cooperative Fisheries Unit at Montana State University, wrote: “In the early 1970’s, the importance of quantifying flow needs of aquatic organisms began receiving serious attention. In July 1976 the Cooperative Instream Flow Service Group was initiated and has functioned under the direction of Dr. Clair Stalnaker to date. … the group has far exceeded the intent of its original objectives and, in my opinion, has made the largest contribution to fisheries of any specialty group within the USFWS or other Federal agency. Through their efforts, the Instream Flow Incremental Methodology was developed and has become the most widely accepted methodology in North America: it has become a ‘household’ word among fisheries biologists. The methodology … provides a framework presenting decision-makers with a series of management options, and their expected consequences. The positive outcome of their efforts toward the protection of inland stream fisheries is immeasurable.”

The Instream Flow Incremental Methodology has been criticized by some, but most of these criticisms have been based on incomplete application or understanding of IFIM. Clair has emphatically stressed the need to incorporate hydrology, with all its variability, and watershed ecology, including life history, physiology, and population dynamics, into IFIM – it is not just a one or two step process.

The list of instream flow publications authored or co-authored by Clair Stalnaker is very impressive. He has served on National Research Council committees to address important river management issues in the United States.

The Instream Flow Council is proud to present its 2008 Lifetime Achievement Award to Clair Stalnaker.