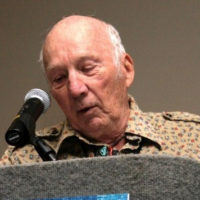 Don Tennant is one of the founding fathers of modern instream flow policy and science. Don introduced his views to the world during a tumultuous period in the early 1950s, when restoring and retaining adequate amounts of water within rivers to sustain fish or any instream use was a new paradigm and not initially well received. He is recognized for his innovative views on instream flow management and protection, and most notably his crown jewel, the Tennant Method.

The Tennant Method is among the most cost-effective approaches used by natural resource managers to quantify and protect dynamic seasonal environmental flow regimes for fish, wildlife, recreation, and environmental resources in the world’s flowing waters.

Don is a visionary instream flow pioneer who initially promoted the importance of quantifying and protecting seasonal dynamic flow regimes in rivers in lieu of a flat line minimum flow regime. His work and concepts have proven to be timeless and have set the stage for the development of many other more data intensive methods and research.

Don began to develop his method by observing ecological responses to various seasonal flows of rivers in the Midwest and Northeastern United States in the 1950s. As Don’s career took him to other parts of the United States and world, he continued adding to his library of observations and refining his conclusions. He used this knowledge to develop and refine standardized relationships of ecological responses to hydrologic flow variation based on percentage ranges of the flow statistic that can be estimated most reliably, the mean or average annual flow. His seasonal recommendations for ranges of standardized flow percentages can also be modified and refined with empirical data and multiple site specific observations.

In the early 1960s, Don began publishing his method and presenting it at regional and national workshops. Others familiar with his method initially called it the Montana Method. However by the late 60s, 70s and 80s, its popularity had increased and geographic scope of application spread throughout the world. The method was renamed the Tennant Method because of its expanded geographic application and to avoid confusion between the use of Don’s method and other instream flow methods used in Montana and other locations where multiple methods were used.

When Don initially began publishing and presenting on the Tennant Method, instream flow values, issues, and protection were just starting to gain attention. The 1970s and 1980s were an era when the bulk of formal instream flow legal protection mechanisms were initially enacted.

Don Tennant’s views and method to establish instream flows for ecosystem management set the stage for advances to come. They encompassed a holistic approach during the early years of instream flow awareness and served as catalysts for the science of dynamic instream flows.

Don was clearly ahead of his time. His contributions continue to shape the world of instream flow science and challenge scientists to explore new approaches and improvements. The Instream Flow Council is proud to present its 2008 “Making a Difference Award” to Don Tennant for his invaluable and outstanding contributions to the development and evolution of instream flow science, policy, and protection.