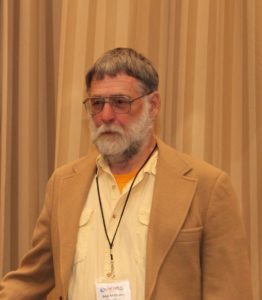 Dr. Bob Milhous served as hydrologist and hydraulic engineer at the USFWS/USGS Instream Flow Group (with many subsequent changes of name and organizational structure) and is best known among instream flow practitioners as the lead on developing modeling software, with particular emphasis on hydraulics, in the Physical HABitat SIMulation (PHABSIM) of the Instream Flow Incremental Methodology (IFIM).

Four of his publications (Bovee and Milhous 1978; Milhous et al. 1984,1989; Stalnaker et al. 1989) are the gospels of IFIM and PHABSIM. IFIM/PHABSIM was the gateway for many instream flow biologists and provided a way to evaluate the ecological significance of changes in flow at a microhabitat scale, but it is also amenable to other scales. These tools are still in use and much discussed, sometimes with controversy, the sign of a valuable development.

Bob also trained many of the instream flow practitioners in use of the models; his classes were always informative and focused on giving the user the ability to understand the strengths and limitations of the models under diverse circumstances. He is also well known for his contributions to fluvial geomorphology, particularly sediment transport.